Hey peoples! I hope you are all enjoying the last bit of your weekend! I can’t believe it’s already May! Wow, time has been flying lately…where did April go?

Usually on Sunday morning, I wake up with a plan…a pancake plan if you will. Because you guys know that a Sunday without celebrating Pancake Sunday just doesn’t happen in Casa de Broccoli! 😉

This morning, my plan was one that had already been executed by another genius mind…Kayla from Little Miss Healthify! This gal amazes me with her talent in the kitchen at such a young age. I only WISH I knew half of what she knows when I started college. Maybe I wouldn’t have had to subsist on pizza rolls and cold cereal…ah, but that’s a story for another day! Let’s get to the stacks!

I knew from the time I saw her post for these Cinnamon-Raisin Pancakes that I had to try them! I mean, how can one resist the classic combo of cinnamon and raisins?

I followed the recipe exactly, only subbing whole oats for about 1/4 of the oat flour and adding in 1 teaspoon of vanilla.

I layered my cakes with Sarena’s Coconut Cream (unsweetened) because let’s face it, I will NEVER get tired of that stuff! 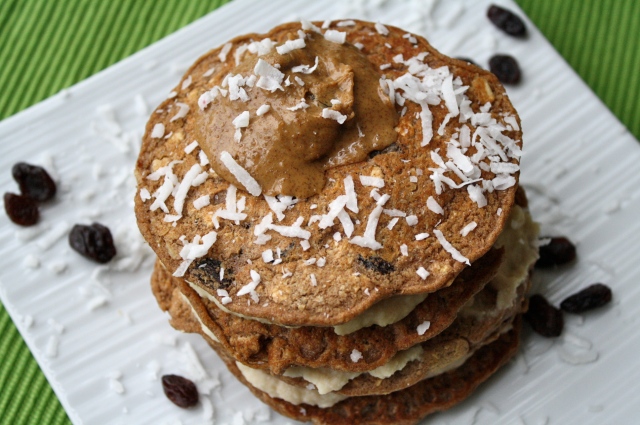 And topped them with PB&Co. Cinnamon Raisin Swirl and unsweetened coconut 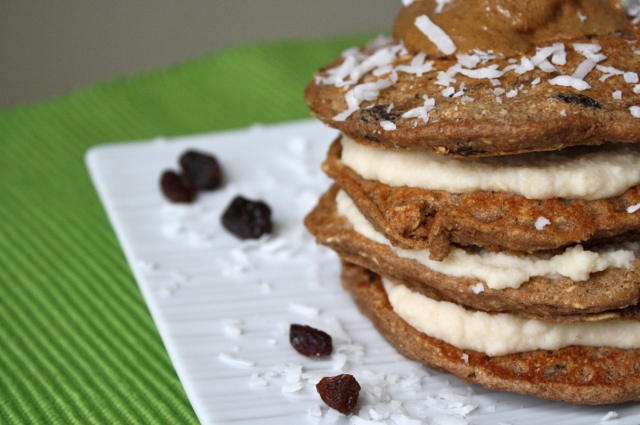 They ARE as good as they look…but don’t just trust me, try them for yourself!

Halfway through graciously savoring these cakes, I remembered this guy in the fridge!

Well, I’ve spent the majority of the day getting caught up on blogs and piddling around the house instead of going to the grocery store and finishing the laundry…and now it’s POURING outside! Hmm, suddenly clean clothes take surprising precedence over produce and almond milk! 😉

How did you spend your Sunday?