Cover Me in Chocolate!

Just when I thought I had shaken my sugary addiction from last week’s cookie binge, I found a new “drug” today…chocolate! Now, I’m not typically a chocolaholic. I could take it or leave it. Hand me a cake donut, muffin, or other baked good and we have a different story!

I started my morning with a hearty waffle mountain and some spinachy goodness in the form of a green monster shake. As you can see, I had good intentions for the day…

What’s in this Waffle Mountain? 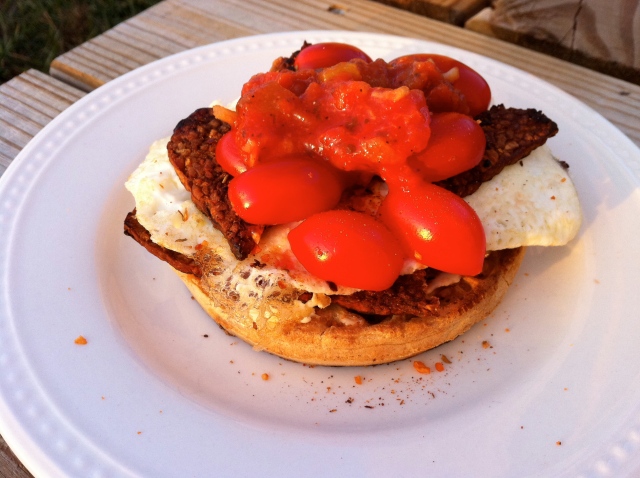 But then came this!

Oh.my.word! So easy to make and it was a HIT at work even though mine came out more like “stumps” than bark! Next time I’ll use a bigger pan!

A gift from the Emergency Room Staff.
I ❤ WS Peppermint Bark!

I was able to control myself for most of the morning, but after lunch all bets were off!

I thought when I left work that the chocolate cravings would stay at the hospital, but NOOOOO those little devils followed me home and forced me to make this:

I promise that's not steak with my oats!

I used all the same ingredients as Heather, but being as I wanted my chocolate fix sooner than later, I decided to crank up the oven to 450 and baked for 15-20 minutes instead. They paired so well with the oats (kept it simple: 1/2 cup oats, 1/2 cup almond milk, 1/2 cup water prepared on stove-top) with the sprinkle of cinnamon and coconut.

I am happy to announce that I my chocolate needs have been officially met and then some!

Are you ready for Christmas or are you going to be battling the crowds tomorrow with the other Christmas Eve panicky procrastinators?
I will be out there! Not for long (I hope), just have to pick up ONE thing for my dad!

5 Responses to Cover Me in Chocolate!